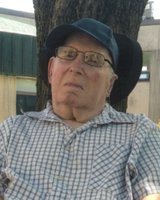 It is with appreciation for a life well-lived that the family of Stanley Richards announces his passing, which occurred on Saturday, May 15, 2021 at Rocmaura Nursing Home. Born in Central Greenwich on July 8, 1925, he was a son of the late Thomas and Christina (Carr) Richards.

In addition to his parents, Stanley was predeceased by three step-sons: Kevin, Robert and Stephen Gilbert; as well as two brothers Russell and Thomas.

Arrangements are under the care of Brenan’s Bay View Funeral Home, 1461 Manawagonish Rd. Saint John, NB (634-7425). In keeping with Stanley’s wishes, a private graveside service will be held at a later date at St. Paul’s Cemetery in Oak Point. For those who wish, remembrances may be made to Diabetes Canada, Canadian Cancer Society or Bobby’s Hospice. Online condolences may be placed at www.BrenansFH.com