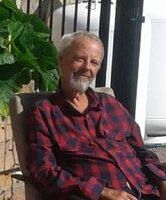 The family of Charles Brent Bird are saddened to announce his passing on September 6th, 2021, at the Saint John Reginal Hospital.

Brent was born in Toronto in 1966 to Carol Ann and Donald Charles Bird of Guelph and Saint John NB.

He graduated from the Guelph Collegiate and studied at U.N.B and the University of Guelph.

Brent was an accomplished artist and entrepreneur who founded with his former partner and wife, Kimberly, “Bird Shipping Supplies” in Southwestern Ontario. Brent was a gentle soul with a loveable and generous nature; a friend to all he met.

To celebrate his memory, the family would ask friends to pay forward a good deed to the less fortunate in memory of his nature.

Funeral arrangements are under the care and director of Brenan’s Funeral Home, 111 Paradise Row, Saint John, NB (634-7424). In keeping with Brent’s wishes cremation has taken place and a private family graveside will take place at a future date. For those who wish, condolences can be placed at www.BrenansFH.com.