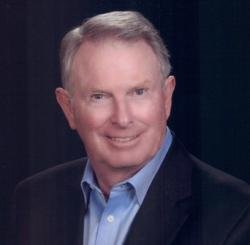 It is with heartfelt sadness and respect for a life well-lived that we share the passing of Clark Sancton of Rothesay, beloved husband of Jennifer (Schmalz) Sancton. On Thursday, March 22, 2018 Clark passed away peacefully surrounded by family at Bobby’s Hospice. Born on December 18, 1944 in Truro, NS, he was the son of the late Clifford and Mary (Clark) Sancton. Clark treasured the times spent with those he loved and especially looked forward to the times with his grandchildren who were his world. Their accomplishments and those of his family made him so proud. He will always be lovingly remembered as a dedicated and devoted family man. Prior to his retirement, Clark was President of Sancton Group Inc. He was actively involved in his community having served as Past President of the YMCA Saint John, RCS Netherwood and volunteered on many community boards. He was a proud recipient of the YMCA Red Triangle Award for exemplifying commitment to people and to service through leadership. He was an active member of the RKYC, the Union Club and the Riverside Country Club. Clark took great comfort in his faith and was actively involved with St. Paul’s Valley and St. Paul’s Rothesay Churches. He enjoyed fly fishing, golfing, the outdoors and woodworking, however, his true passions were sailing and traveling with friends and family. In addition to his wife Jennifer of 48 years, Clark is survived by their children, Andrew Sancton (Heidi) of Halifax, Matthew Sancton (Stephanie) of Halifax and Heather DeBlois (Dave) of New Glasgow; sister, Jill Buckley (John) of Sussex; brother, Tom Sancton (Linda) of Halifax; precious grandchildren, Abigale and Molly Sancton and Henry and Sophie DeBlois; as well as several nieces and nephews. Arrangements are under the care and direction of Brenan’s Funeral Home, 111 Paradise Row, Saint John (634-7424) with visiting on Monday, March 26, 2018 from 2:00 - 8:00 PM. The funeral service will be held from St. Paul’s Anglican Church, 4 Church Avenue, Rothesay on Tuesday, March 27, 2018 at 11:00 AM. Private interment will take place in Fernhill Cemetery. In lieu of flowers, remembrances made to St. Paul’s Anglican Church Endowment Fund, YMCA of Greater Saint John Endowment Fund, Saint John Regional Hospital Foundation or Bobby’s Hospice would be appreciated by the family.

Share Your Memory of
N.
Upload Your Memory View All Memories
Be the first to upload a memory!