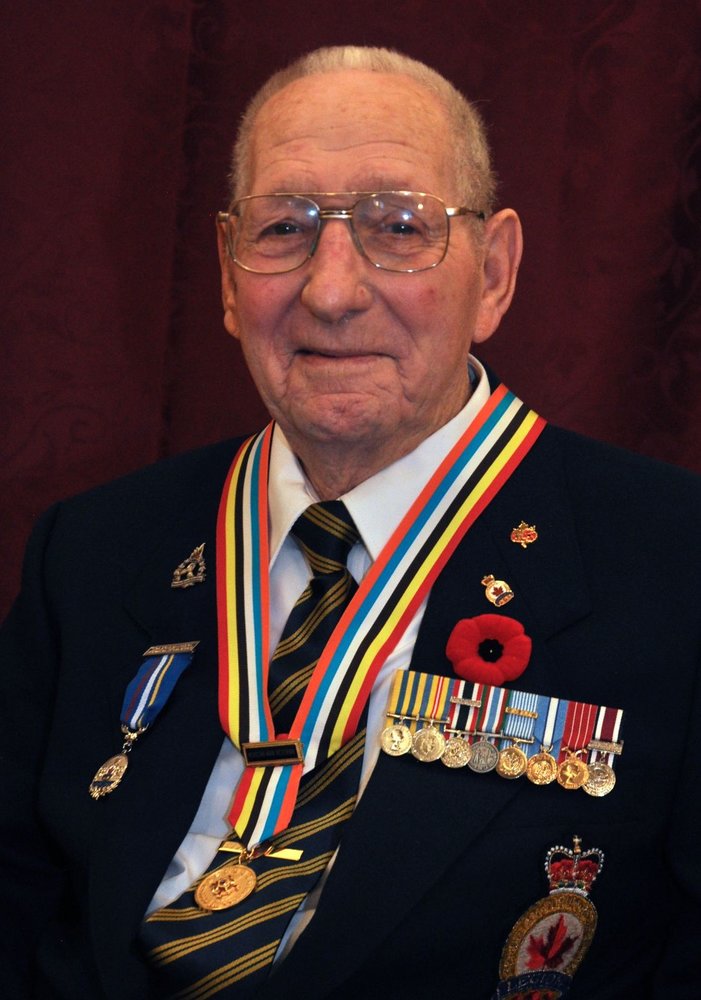 Master Corporal Eugene L. Zwicker CD (Retired) of Ridgewood Veteran’s Wings, Saint John and formerly of Geary N.B., passed away peacefully on Monday, April 1, 2019 at Ridgewood at the age of 89.Born in Kentville, N.S., Eugene was the son of the late Colin and Ruby (Sanford) Zwicker.

In 1950 Eugene signed up with the armed forces and joined the 2nd Battalion Princess Patricia’s Canadian Light Infantry, seeing action in Korea until 1952. Upon returning, and after a short respite, Eugene rejoined the armed forces with the 2nd Battalion Black Watch at Camp Aldershot, N.S. In 1958 he was stationed to base Gagetown. In 1962 he was sent as part of the NATO forces in Werl, Germany, returning to Gagetown in 1965, where he remained until retirement in 1969. Eugene saw peacekeeping duty in Werl and in Cyprus. On retirement from the Canadian Armed Forces, Eugene joined The Canadian Corps of Commissioners and was active in several organizations including the Royal Canadian Legion Br. #93 in Oromocto. In 2013 Eugene was awarded the Korean Ambassador for Peace Medal by South Korea’s Ambassador to Canada.

Eugene was predeceased by his wife Gladys; parents Colin and Ruby; brothers Kenneth and Colin; sisters Hilda and Dora.

Arrangements are under the care of Brenan’s Bay View Funeral Home, 1461 Manawagonish Road, Saint John, N.B. (634-7425). At the request of the family, there will be no visitation. A service will be held at the Geary, Waterville, French Lake Cemetery on Saturday, May 11, 2019 at 1:00PM. All are welcome. In Lieu of flowers, the family has requested donations be made to The Royal Canadian Legion, The NB Alzheimer’s Foundation or charity of the donor’s choice. Online Condolences may be placed at www.BrenansFH.com

Share Your Memory of
Eugene
Upload Your Memory View All Memories
Be the first to upload a memory!