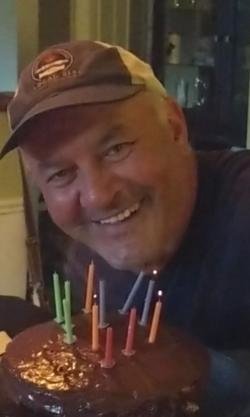 It is with great sadness that we announce the passing of Wayne Anthony Guitard, best friend and cherished common-law spouse of the late Kimberly Ann Saunders, on Wednesday, February 27, 2019 at home. Born on July 7, 1964 in Saint John, NB, he was the son of Joseph "Jack" and Joan Guitard. Wayne graduated from SJHS in 1982, prior to graduating from NBCC in 1984 from the Steam/Pipefitter Program and completed his apprenticeship at the Saint John Shipyard. Wayne worked as a Pipefitter with Jacobs Industrial Services at the Irving Refinery and was a member of Plumber and Pipefitters Local 213. He was an instructor at NSCC in Halifax and Eastern College in Saint John. Most recently Wayne was employed at Pizza Delight and Sobeys. He grew up playing hockey and especially enjoyed watching the Montreal Canadians. In addition to his parents, Wayne is survived by his sister, Angela Cameron (Ewen); nephew, Jack Cameron; niece, Cedelia Cameron; first wife, Connie Bartlett; as well as Kim’s children and grandchildren and several aunts, uncles and cousins. Wayne was predeceased by his maternal granparents Arthur and Alice Bourque and paternal grandparents Murray and Margaret Guitard. Arrangements are under the care of Brenan’s Bay View Funeral Home, 1461 Manawagonish Road, Saint John (634-7425). Visitation will be held on Tuesday, March 5, 2019 from 1:00 – 2:00 pm, with Funeral Liturgy to follow at 2:00 in the Brenan’s Bay View Funeral Home Chapel. Interment will take place at Holy Cross at a later date. Donations in Wayne’s memory can be made to a charity of the Donor’s Choice.

Share Your Memory of
Wayne
Upload Your Memory View All Memories
Be the first to upload a memory!